With the prospect of the winter sports season approaching quickly, several teams are starting to band back together. Wrestlers can be found running the halls of the school and swimmers have celebrated the kickoff to their season with their midnight madness event. But for the Caldwell varsity girls basketball team, their training and season started as soon as school let out for the summer.

The team, led by the five returning seniors Carli Carroll, Emma Krupp, Gabby Gaffney, Kat Theobald, and Makenna Tabahz knew that coming into this season, there would be a different atmosphere. At the conclusion of last winter, the program lost seven seniors, who all played different positions and were vital components to the energy on the court. With over half of their teammates off to college, the girls knew that it would be a rebuilding year, but that it did not necessarily mean it would be a losing one. Conscious

of the extra effort and dedication that would have to be put into this season, they started to train early in the summer; scheduling practices early in the morning where they would work on basic skills, plays, and even scrimmage. Junior Natalie Lorenz, a center on the team commented, “Our summer morning workouts were so much fun because they were low intensity. You could show up whenever you could make it and get guaranteed one on one training. For me, it was time well spent getting my hand on a basketball again and meeting the new freshmen. ”

Later at night twice a week, the team would regroup in West Orange to play in a summer league. Playing tough competition such as Central and Glen Ridge, the girls would take what they learned earlier in their morning sessions and transfer it to their game play. Junior Jamie Pierce added how, “The summer league games were an awesome preseason opportunity, because it allowed us to play cohesively for the first time.”

With the dog days of summer drawing to a close, the seniors finally had some time to relax and reflect on what they wanted for the upcoming season. They met several times to discuss topics pertaining to the court, and how they could make basketball fun off the court as well. The top of the list included ideas such as locker buddies, team “Bachelor” viewing parties, sushi dinners post practice, and shirts designed for their friends and families. Pertaining to the game, the girls also imagined where they would be by the end of the season. Senior shooting guard Carli Carrol shared with me, “By February, we want to accomplish three major goals: overcoming obstacles together, learning new techniques for in game scenarios, and maintaining a strong team bond.” Their training picked back up again in mid-October, with practices once a week and fall league games every Sunday afternoon. Still, the girls felt that it wasn’t enough time together. Bearing the cold weather, they have organized shoot arounds in local parks and have looked to grab free gym space at any point they can. 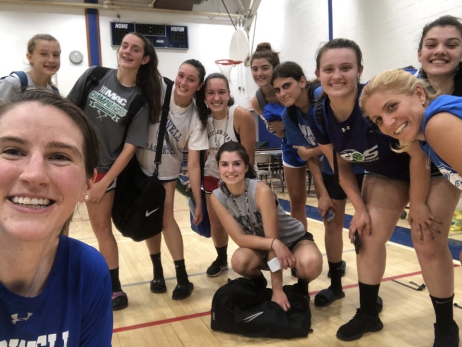 Their mentality this year? “Coming different,” says returning starter Brielle Guarente who is eager for tryouts and the season to begin. “We have all worked hard to get better throughout the summer and fall. Our team is stronger both mentally and physically, and we can only go up from where we left off. This year I feel we are starting on a clean slate with intentions to stay 100% focused for the entire season.” At the top of the junior’s bucket list includes a dual win with the boy’s team at the holiday tournament in December.

Weekly text messages are sent frequently in the girl’s group chat, counting down the days until they are allowed to hit the courts and start tryouts. They will start their season off with three away scrimmages against Clifton, Saddle River Day School, and McNair. When looking forward to their first official game against Cedar Grove in late December, the seniors are confident in their ability to lead the team to victory and a fantastic upcoming season.