The JCHS Theatre Arts Club’s season came to a triumphant start this past weekend with three performances of “The 25th Annual Putnam County Spelling Bee.” Directed by JCHS theatre director Greg Paradis and choreographed by Mariel Letourneau, “Spelling Bee” was a bold choice for the JCHS stage, the likes of which have never really been seen before. The emotion-charged, hilarious, and touching musical comedy provided for a uniquely unforgettable night at the theater.

“Spelling Bee” follows the stories of six different middle school students competing in a spelling bee. As the story unfolds, the audience learns each character’s attitude towards the bee, whether it be “all business” like Marcy Park (Lily Chaiet), ruthlessly competitive like William Barfee (Josh Baumgardt), or unendingly enthusiastic like Logainne “Schwarzy” Schwartzand-Grubenierre (DeAnna Meluso). Centering in on Olive Ostrovsky’s (Morgan Vybihal) neglectful relationship with her parents, “Spelling Bee” tackles the question of how much pressure parents put on their kids vs. how much pressure kids put on themselves. Spelling Bee often had me laughing to the point of gasping for breath, and then almost being moved to tears a few moments later. 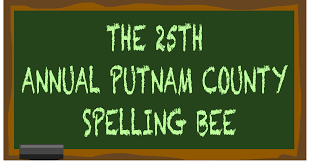 The show’s comedic achievement can be attributed not only to the subtle and effective directing of Paradis, but also to the chemistry and timing of the cast. Barfee’s aggressive German accent, Leaf Coneybear’s (Christian Rivera) rendition of “I’m Not That Smart,” which featured him singing around the stage in a T-Rex mask, and Vice Principal Panch’s (James Kinally) matter-of-fact command to spell “okurrrrrrrrrr” earned the delight of the crowd, who guffawed through the expertly timed comedic dialogue.

Another fun feature of this production was the unexpected participation of audience members, who were plucked out of their chairs to perform in the first half of the musical; having to ad-lib dancing and spelling.

Though on the surface, “Spelling Bee” centered around quirky, larger than life characters, the production had no shortage of dramatic, heartfelt moments. Each character had true vulnerabilities in addition to their comedic contributions. The musical explored the trials of adolescence and the way kids cope with the pressure to succeed. In particular, Vybihal’s delivery of “The I Love You Song,” stopped the show cold, wherein she expresses how much she misses her mom, who is in India on a “nine month spiritual journey,” and the anguish of living with her dad because of how “he takes out on me what he wants to take out on you.” Another profound moment was when Marcy realizes, with the help of Jesus, that she does not have to win the bee to be happy, and decides to intentionally misspell ‘camouflage.’ Cast member Hunter Halliwell thought the message of the show transcended generations; “It shows the stress that’s being put on us as kids, and shows how we handle it. Even though the show was written over ten years ago, it has such a relatable and relevant topic to this day.” At the end of the show, I was not as interested in who was going to win the spelling bee, but rather how each character changed throughout the show from both the spelling bee and the relationships they made with the other competitors.

Vybihal attributed the show’s success to the positivity of the rehearsal process, saying, “What made Spelling Bee so special was that we were able to leave every rehearsal confidentially, knowing that we would eventually put on a great show.” Audience member Maddie Chelak praised the show as “one of the best JCHS productions I’ve seen,” she said. “It was filled with emotion. I was laughing hysterically one second and then crying the next. Everyone in the cast embodied their characters so well as if they were made for them – I was blown away and happily reminded of how talented my peers are.”

The best theatre begs difficult questions to be asked, but does not answer them. The best theatre allows for one to see themselves and others in the characters that are portrayed onstage, and better understand the people in their life as a result. The best theatre has the audience dying of laughter, sitting on the edge of their seats, and wiping back tears all in a few short hours. JCHS’s “Spelling Bee” did all that and then some.

Stay tuned for the spring when JCHS will present another musical, ABBA’s “Mamma Mia!”