On September 24, 2019, Nancy Pelosi launched an impeachment inquiry against President Donald Trump, a surprising move considering Pelosi’s past hesitation to take action against the President. The inquiry followed a whistleblower’s complaint which alleged the President pressed leadership in Ukraine to investigate Joe Biden, a leading contender for the 2020 Democratic nomination, and advance his own personal interests. The additional controversy of a phone call made between President Trump and Ukranian President Volodymyr Zelensky, in which Trump pressured Zelensky to investigate Joe Biden and his son, was enough for Speaker of the House Pelosi to formally announce an impeachment inquiry into the President.

At the center of the Ukraine controversy which led to the impeachment inquiry is a whistleblower. Though discredited by the President as an unreliable second-hand source, in their complaint the whistleblower claims that their evidence was gathered through “multiple officials” whose fact patterns “were consistent with one another.” The complaint addressed a situation of “urgent concern,” in which the President used his power to work, or attempt to work with foreign governments to gather discrediting information on domestic political opponents. Notably, the complaint outlines an instance 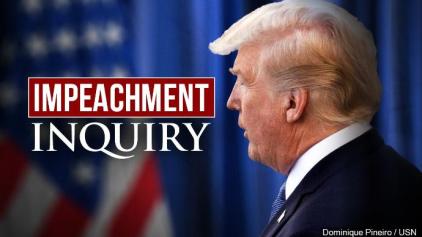 where, through a phone call, the President pressed the Ukranian President to investigate Joe Biden and his son, Hunter Biden. The phone call between the two leaders has now been used by House Democrats as a primary rationale for their launching of an impeachment inquiry.

The “phone call made by the President of the United States calling a foreign power to intervene in his election… is a breach of his constitutional responsibilities” said Nancy Pelosi in her announcement of the impeachment inquiry. The complaint, she added, was of “urgent concern,” a view shared by the intelligence community inspector general. The response to the complaint and subsequent impeachment inquiry has been mixed. While most acknowledge the credibility of the complaint, some do not see impeachment as a proper way of dealing with the controversy. The likelihood that the Republican-majority Senate will convict Trump is minimal, thus, some see impeachment as an exercise in futility. Others believe impeachment is the only way to hold the President accountable for his actions. Considering the many controversies Trump and his administration have faced since coming into office, the pursuit of impeachment is, to some, an act of retribution to finally pin the President down on a crime.

Regardless of whether impeachment is warranted or responsible, it is important to briefly outline what could happen from here. Already, House committees are investigating potential abuses of power by the President as part of a formal

impeachment inquiry. Shortly after the inquiry was announced, the House issued subpoenas to several high-ranking federal officials, including Secretary of State Mike Pompeo and attorney to the President Rudy Giuliani, with the aim of gathering documents concerning any political abuses made by the President and his administration. More interviews and depositions by the House are expected to continue for the next couple of months, all to determine whether enough evidence is present to launch into actual impeachment proceedings. A vote on the articles of impeachment is expected by several House leaders to occur before the year ends.