On March 23rd, the Trump administration added yet another item to their list of controversial policies: a transgender military ban that some advocates claim to be worse than the now-defunct “don’t ask, don’t tell” policy. The first document of the administration came in the form of a presidential memo, asserting that “transgender persons with a history or diagnosis of gender dysphoria — individuals who the policies state may require substantial medical treatment, including medications and surgery — are disqualified from military service except under certain limited circumstances.”

A follow-up document titled “Department of Defense Report and Recommendations on Military Service by Transgender Persons,” outlines specific policy changes in regards to trans individuals serving in the military. After 46-pages filled with meaningless excuses for the ban and its reasonings, it is made clear that the Department of Defense Report and Recommendations had reached the conclusion that allowing gender transition or dysphoria would “impair unit readiness,” cost a “disproportionate amount,” and “undermine unit readiness.”

However, they included no clear basis for this reasoning nor any research to back it up in the document. To further add insult to injury, even in the face of federal court mandated order issued the Tuesday prior to the ban’s passing, the Department of Justice outright refused to name the military experts they had consulted over the ban. One report makes the claim that their “panel of experts” consisted of politicians who had been openly anti-LGBTQ+ in the past, but there has been no clarification from any of the White House’s representatives on the validity of this statement. 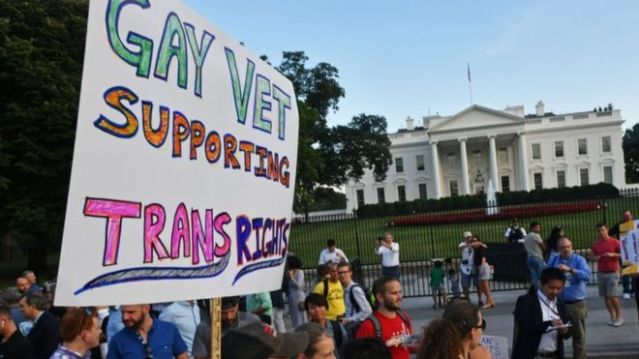 Additionally, the White House issued a statement the same Friday claiming that the move would enable the government to provide better care “to all individuals who want to join and fight for the best military force the world has ever seen.” This is a statement that they then attempted to back up with the reasoning that they never specifically preclude “service by transgender persons who do not have a history or diagnosis of gender dysphoria and are willing and able to meet all standards that apply to their biological sex.” Given that the necessity of meeting “all standards that apply to their biological sex” requires one to live as their assigned sex, the logic here escapes me. All the White House’s latest statement does is say, “Hey! Just stop being trans and then you can serve with us.” Surely that’s a fair price to pay for serving in the world’s “best military force,” right?