Vinyl: Why Is It Making A Comeback?

You might have seen vinyl records on TV, in movies or even in your basement among other old “junk” stored away for dust to collect on, and heard adults poke fun at you for having it easy because you listen to music on your phone or iPod. But if listening on your phone is so easy and convenient, then why are these big old vinyl records becoming increasingly popular in teenagers and young adults? 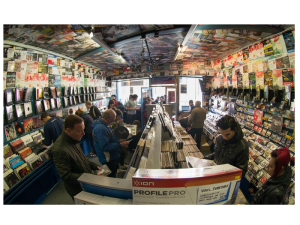 Vinyl records have been around for decades and began to decrease in popularity in the late 80s when cassettes began to take over, and records even lost more once CD’s and MP3’s came on the scene in the 90’s and 2000’s. Up until now vinyl has been seen as a nostalgic novelty that our parents and grandparents remember playing to unwind after a long day. But they are becoming more popular than they’ve been since the 70s. We live in a digital world with almost everything becoming digital, in news, entertainment, magazines, and even music with music players and streaming services like Apple Music, Spotify, Pandora and many, many more. Even with all this convenience there is still an oasis of analog technology, and it’s booming. Maybe it’s because so many people want to experience what it was like before the internet, or maybe some people just think it’s cool either way everybody is started to hop on the vinyl bandwagon, even me (owning 30 plus records).

Big name artists like Jack White, the Foo Fighters, and more are releasing music on vinyl and helping to promote its comeback and it doesn’t hurt that so many classic artist like, Led Zeppelin, and David Bowie and releasing reissues of classic albums on all forms of digital and analog musical media to, what I think, get old fans excited again. But this has sparked a revolution of young people buying, selling and trading records almost as if they had never gone away. It has also become easier with the help of online stores providing everybody’s vinyl needs. Amazon is this number one seller of vinyl records in the world, but that doesn’t mean it’s the only one. Record stores are beginning to thrive in this rediscovered market. This comeback has also been great for record labels and artists because they now have fans who are more enthusiastic about buying physical copies of music instead of digital copies which would be split between the artist, the label and the online store where the music was sold (i.e. iTunes).

According to the online magazine, Factmag, the U.S. vinyl industry has grown exponentially in the past 5 years, and in the first half of 2015 it was responsible for 30% of all physical music bought.  That’s up 52% from previous years.  Vinyl sales are now worth more than all forms of free, ad-sourcing streaming services combined. With vinyl in such high demand, many new pressing plants have opened across North America. Vinyl’s rediscovered value has also landed it a spot on HBO being one of the subjects of a new TV drama about record companies in the 70s.

You don’t have to be a “hipster” to collect vinyl anymore because many popular artists are releasing their new music on LP, along with the more popular MP3 and CD formats. Artists like Kendrick Lamar, Drake, Taylor Swift, and Daft Punk are releasing on all platforms. As an avid concert goer, I have seen vinyl selling fast at the merch table outselling CD’s and sometimes even T-shirts.

Buying vinyl has not only become a hobby and pastime, but it has become a community. This community has grown so large that twice a year every year is Record Store Day (3rd Saturday in April, and Black Friday), a day where artists release new and exclusive stuff for people to get out and support a local record store. If you go to a record store the people there are very kind and very helpful. A record store employee definately has the best taste in music and will recommend something new for you that you will definitely enjoy because all they do is listen to music all day so they know what’s good. It’s not only vinyl coming back, but it can also be seen as a small comeback in the music industry as a whole.