Disney Channel’s “High School Musical” is one of the most iconic movies of the early 2000s, changing the “status quo” for many Disney Channel movies that came to be. The franchise had three movies, each focusing on a different aspect of the main six Wildcats

When Disney+ came out in November of 2019 and announced the return of the popular franchise with “High School Musical: The Musical: The Series,” I was not excited. I initially thought that it would be a huge flop as an attempt to make money off the nostalgia associated with the “High School Musical” name. However, the show has proved to be much more than just a “remake” of the Disney Channel movie.

It follows the story of a high school drama “teacher,” named Miss Jenn (Kate Reinders), who begins working at East High, where the “High School Musical” movies were actually filmed and decides to put on the “High School Musical” as the  fall show to be an homage to the iconic Disney movies. Ricky Bowen (Joshua Bassett) was never really into musicals, but decided to try out for Troy after finding out his ex-girlfriend, Nini Salazar-Roberts (Olivia Rodrigo), wanted to play the role of Gabriella. However, Nini already has a new boyfriend, E.J. Caswell (Matt Cornett), who is sure to get the lead as Troy. She must also deal with Gina Porter (Sofia Wylie), a transfer student who already has her eyes set on being Gabriella as a chance to prove her worth at East High. Drama ensues, as Ricky and Nini, the “underdogs,” receive the roles of Troy and Gabriella, and must overcome their awkward relationship status. With catchy original songs, along with some classical “High School Musical” bops, the show is transformed as these teenagers work together to overcome family issues, relationship drama, lies surrounding their teacher’s authority, and more.

After finally giving the show a chance, I quickly became invested, as it offered so much more than I expected from a Disney show. The characters are mostly played by actual teenagers, making their struggles just that more relatable. There are all types of inclusion: Sharpay is played by Seb Matthew-Smith (Joe Serafini), who also starts dating the student-choreographer, Carlos Rodriguiez (Frankie Rodriguiez); Nini is raised by two moms; Nini’s best friend, Kourtney (Dara Renee) is a self-proclaimed feminist. The series 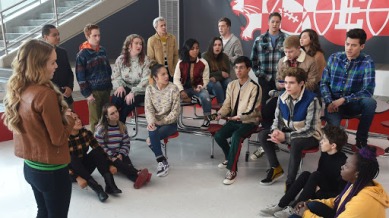 also tackles issues such as: divorce, the lack of support for the dramatic arts, and the stereotypical teenage relationship problems. There were also some returns from the original “High School Musical.” Kaycee Stroh, who played Martha Cox, had a cameo in episode six that featured her doing the iconic “pop and lock” from “Stick to the Status Quo.” Lucas Grabeel, who played Ryan Evans, also appeared as himself in episode 8, and even had a song with Ms. Jenn (“Role of a Lifetime”). These cameos really added to the series because it played into the nostalgia of the original.

As aforementioned, the music on the show is a mix of new songs written for the series, such as “I Think I Kinda, You Know,” and “Wondering”, along with original “High School Musical” songs such as “Getcha’ Head in the Game” and “Breaking Free.” The new songs of the show are extremely catchy and a few are even written by some of the show’s actors, specifically “All I Want” (Olivia Rodrigo) and “Just for a Moment” (Olivia Rodrigo and Joshua Bassett). They bring a fresh new feeling to the series and differentiates it from being just a “remake.” But they also have some interesting performances of original songs, such as Ricky singing an acoustic version of Gabriella’s “When There was Me and You.”

Despite all the positive aspects of the series, I do have a few complaints concerning the actual “High School Musical” they put on. The whole season was building up to the final two episodes where they performed the show, which really built up my expectations.

However, I was disappointed due to multiple reasons, the main one being how short the episodes were. Both the ninth and tenth episodes were 28 minutes each, which is not a lot of time to include both the musical aspect and the actual storyline of the series. This led to an issue with a lot of the actual musical being cut and rearranged to fit the storyline of the series, but this only messed up the plot of the musical. They showed a snippet of “The Start of Something New,” cut to the storyline of the episode where they had technical issues, then started preparing for “Stick to the Status Quo.” This would have been fine, but after “Stick to the Status Quo,” they performed “Getcha’ Head in the Game,” to fit into Ricky’s storyline.

While I understand what they were attempting to do, this messes up the original plot of the musical, as “Getcha’ Head in the Game” was supposed to be performed first to portray Troy’s internal struggle with the choice of basketball or singing. “Stick to the Status Quo” is a result of Troy’s choice to sing, as it deals with everyone in their own respective cliques breaking out of their stereotypes, such as a nerd who loves to dance, or a skater who loves to play the cello. This may seem like a minor detail, but the

previous episodes had shown them preparing to such an extent that I just had high expectations for the performance. Additionally, Nini was just not the great Gabriella I expected her to be. She constantly broke character, again for the storyline of the series, which was detrimental as there was a scout for a performing arts school, and she should have been more professional. The actual musical ended halfway through the tenth episode, which shocked me, as I felt that it was quite rushed. These issues wouldn’t have existed if only the episodes were longer, especially since they were the “finale” episodes. The actual episode itself also had a predictable ending, where Nini has to choose between staying at East High or transferring to the performing arts school. However, despite my complaints, I really did enjoy the series and I’m extremely excited to see what’s in store for the characters in season 2.

Overall, I would definitely recommend “High School Musical: The Musical: The Series” to anyone who has Disney+ and wants to relive the joy that the original movies brought. The music is very catchy and the series truly does exceed expectations for a Disney show. There are currently 10 episodes in season 1 and season 2 has already been confirmed to come out later this year.