The book “The Goldfinch,” written by Donna Tartt, spread its wings and soared, becoming the #1 international bestseller on 25 different book critics. A month after school started, I was finally able to get my hands on a copy of the book and immediately started reading. But let me tell you, this book is extremely long and I had trouble keeping focus. The story lengthens and delves into explanations about antiques, nearly causing me to want to close the book and put it aside for later, which is what I did for two weeks. The storyline fascinated me, because it follows a teenager struggling with the death of his mother, and how a painting can be a lifeline to who he was before his mother’s death intrigued me.

I do agree “The Goldfinch” has deserved the spotlight it has received this year, but the film fell short. The film was released on September 13 in many U.S. and UK cinemas. There have been many mixed reviews of “The Goldfinch;” the film received 24% on the Tomatometer, which measures a movie’s critical reception, although it was rated 72% by audiences on Rotten Tomatoes.

The story begins in the perspective of Theo, a 13-year-old boy, who meets a girl named Pippa while at the Metropolitan Museum of Art in New York City. He later loses his mother in the bombing of the Metropolitan Museum of Art and is told by Pippa’s dying grandfather to take a painting of a goldfinch. After the death of his mother, he is taken to child services, and Theo stays with the Barbour’s, his friend Andy’s family whose parents were also friends with his mother. Theo meets Hobie, who is the partner of the antique store Pippa’s grandfather ran with him, and later becomes a father figure to him. Theo 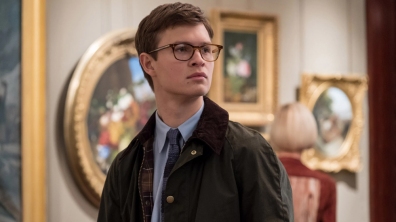 lives with the Barbour family for a majority of the book, before his dad surprises Theo and decides to take him to Las Vegas, Nevada to care for him. This leads to Theo being taken from New York City to Las Vegas, having to adjust to his new surroundings. He then meets Boris, a high schooler Theo befriends and gets into trouble with later on in the book. The book continues on with how Theo is doing in Las Vegas with Boris and living with his dad, who is also dating a woman named Xandra. Eventually, Theo’s dad dies in a car crash and Theo is forced to leave Las Vegas to go back to New York City. Then, he starts living with Hobie and trying to get his life back on track, while focusing on keeping the location of The Goldfinch painting a secret. The book includes a time jump of 8 years, where Theo has become Hobie’s business partner to his antique store and is engaged to Kitsey Barbour, Andy’s younger sister. I will not spoil what happens next in the rest of the book, but I recommend towards readers who love books that are nearly as long as Stephen King’s.

Much to my disappointment, the film strayed from many parts of the book that were significant and essential to the plot, as it was reviewed in USA Today. First, it began with the differences for the casting for the character of Hobie. In the novel, Hobie is described

as having unkempt gray hair and unhealthy white skin. However, actor Jeffrey White was cast to play the character in the film, and did not embody this vision that Tartt displayed. When adapting the pages to screen, the film changed how Boris helps Theo at the end of the story. In the film, after Theo waited weeks for Boris to show up after their encounter from local criminals, Theo attempts suicide as Boris bursts through the doors and is able to help him. In the book, Boris stops Theo from turning himself into the Dutch police for the problems he caused with keeping the painting. Overall, the ending was not what I had hoped, and the adaptation of the book was disappointing.