Making the Most Out of a Disappointing Season: Caldwell Girls Varsity Soccer

The girls varsity soccer season ended on Monday, October 28th, 2019, when they fell to Hanover Park in the first round of the state tournament. Having a 4-14-2 losing record, one would think that the girls had a tough, disappointing, and remorseful season. However, with a non-stop positive attitude, the girls, especially the seniors, made the most out of the season even with a disappointing record.

The girls started their season with questionable excitement. After the loss of ten seniors from the previous season, six of which were starters, the team expected a huge rebuilding year upon them. Returning starters, Makenna Tahbaz, Sarah Blankenship, Megan Blankenship, Angie Nicol, Francesca Veltri, and Victoria Rebimbas came into the

season expecting to show leadership on the field to those who haven’t played as much in the past. New starters, Cassidy Brown, Elizabeth Payne, Izzy Caravela, Alexa Camerino, and Emily Naspo were all welcomed to the new seasons starting lineup. Returning varsity players, Sarah Ash, Abby Jones, and Kayla Drake all returned to assist the team once again. New coming varsity players, Annie Gustavsen, Lily Caravela, Ninah Malleo, Haley Tierney, Cara Handley, and Ania Bargielski were all welcomed to kick off the season.

Being a rebuilding year, Caldwell had a rough start to their season. Losing the first 12 games of the season was certainly disappointing and discouraging to the girls. Coaches and fans from other teams all thinking that Caldwell would be an easy win for them was disheartening. However, it was captains Izzy Caravela, Elizabeth Payne, Sarah Blankenship, and Makenna Tahbaz who kept the team together maintaining positive attitude despite the losing record to start off the season. According to captain Elizabeth Payne, “It was an honor to be a captain of the girls varsity soccer team this year. Being able to lead the team has made my experience great. This program has helped me to form strong relationships with all the girls, forming unforgettable memories. Even though we didn’t win too many games, we still kept our heads high and worked our hardest each game.” The captains carried on team traditions such as locker buddies, power circles, and psych squads (captains drop off candy at every players house the night before a home game) that kept lively positivity going throughout a disappointing season.

The girls finally defeated their first team in the first round of the Essex County tournament against Payne Tech 8-0, and went on to beat East Side 3-2, Cedar Grove 6-0, and Golda Och 5-2. Making their final record, 4-14-2.

Despite a tragic losing record, the team happened to be seeded 15th in the state tournament, paired to play against the 2 seed, Hanover Park in the first round. Hanover Park came into this game expecting a clean sweep to easily move on to the next round. Caldwell, expecting a tough game went into the game with a “no retreat, no surrender” mentality as taught by Coach Mike Teshkoyan, vowing to not let the Hornets come out of the game without a tough fight. The girls were fired up and ready to take on the challenge at hand. They came out hard and strong, shocking the Hornets as they now had to play on their toes. The Chiefs kept up with the Hornets leaving the final score 0-0, going into double overtime and penalty kicks. No one expected the game to be this close, proving the tenacious mentality and work ethic of the team. Caldwell unfortunately fell 4-3 in penalty kicks, and Hanover Park was onto the next round while the season for Caldwell came to a close. 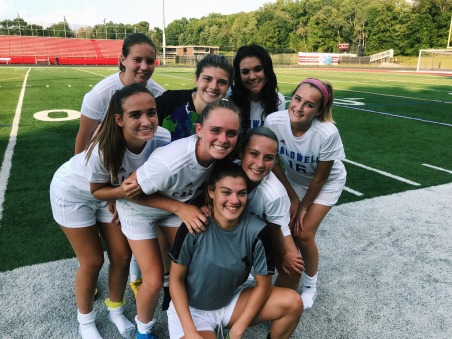 This singular game reflects the entirety of the soccer team’s season, and what it’s like for a losing team to be underdogs and prove everyone else wrong. On behalf of the season, Coach Mike Teshkoyan reflected “This team never quit and it was a credit to the senior leadership who were great role models for their younger teammates. I felt that we played our best soccer at the end of the year and it was a lot of fun and my pleasure coaching this team. I think that what we accomplished this season was creating a sound foundation to build upon in the future.”

Assistant Coach, Kelli Josephson added, “It has been an absolute pleasure to get to coach our varsity girls this year. Every day they decided they were going to be a team who loved each other, and competed. I am so proud of our senior leaders for the examples they set, and I know the future of the program is bright because of what they did.”

The girls certainly learned what it’s like to have to battle everyone doubting them, how to continuously put up a fight, and how to make the most out of disappointing situations. Seniors Abby Jones, Sarah Blankenship, Kayla Drake, Elizabeth Payne, Izzy Caravela, Makenna Tahbaz, Emily Naspo, and Ania Bargielski will all be missed dearly by the soccer program next year.