“Network” opened on Broadway in December following its success in London’s West End. The play is an adaptation of the 1976 film of the same name. “Network” stars Bryan Cranston as Howard Beale. The story is a satire on America and American consumer culture. It follows Howard Beale, an aging news anchor who threatens to kill himself, live on air. He was on the verge of being fired, but when he went on air again, executives found that the American public loved to watch Howard Beale break down and fall closer to insanity. Instead of getting fired, Howard was promoted and his ‘news show’ is placed under the control of entertainment executive, Diana Christensen (Tatiana Maslany). Beale becomes more insane, and the American people become more attached. The television executives quickly learn that Americans just want to be angry, and want to be told when and how to feel. Howard Beale provides that for them. His catch phrase for the show, “I’m mad as hell, and I’m not going to take it anymore!” says it all. He is able get the entirety of America hooked on this catch phrase, never exactly indicating what they should be mad about and why.

“Network” is nominated for five Tony Awards: Best Performance by an Actor in a Leading Role, Best Direction of a Play, Best Scenic Design, Best Lighting Design and Best Sound Design. The nominations for the overall set up of the stage does not come as a shock. The designers took a very unique approach of the set unlike I have ever seen an

another play. The play was carried out on stage, but it was also filmed in real time and projected onto a large screen. The film crew fit seamlessly into the play because the show is about a news show. This not only allowed for the audience to see the action of the play up close, but provided an interesting symbol for technology and consumer culture that perfectly paralleled the ideas that the play was perpetuating. I kept finding myself watching the screen rather than watching the real people perform because it was more convenient. The screen was so large and overpowering that you felt like you could get a better understanding of the play if you just watched the screen. But in doing this, you are choosing to live in a world of technology rather than in reality because it seems more convenient. As people living in the twenty-first century, we are so accustomed to looking at screens because we think that it helps enhance our lives, when in reality, it doesn’t show the whole picture of what is really going on. In looking at the projector, you could see all the faces up close, but you weren’t seeing the whole stage. You were relying on a perspective feed to you rather than your own. This is the essence of “Network”. What happens to our society when we stop thinking for ourselves, and are willing to let the media tell us what to think and feel. “I’m mad as hell and I’m not going to take it anymore,” but nobody knows why, they just feel comfortable with it because that is what they are told to think by Howard Beale. 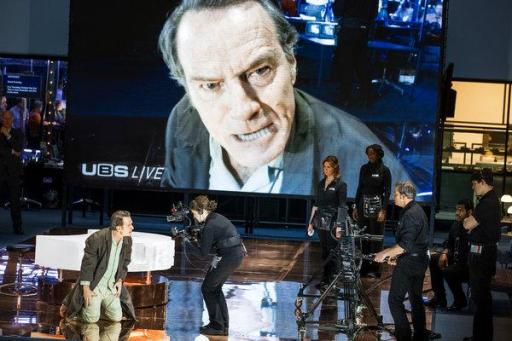 There is still time to see Bryan Cranston and his thought provoking performance in “Network”. The show opened on December 6, 2018 and will close on June 8, 2019. The show has generated great success, originally only supposed to be an 18 week run, closing on March 17, it was extended to April 28, and then again to June 8, for its final extension. When asked about the the length of the run and the difference between live theatre and a movie where everyone could see it. Bryan Cranston responded, “The wonderful thing about theatre is it’s ephemeral. It dissipates. You either see the production or you didn’t.” I think there is something beautiful about that. Live theatre has no real permanence but in a viewer’s mind, where it can last forever. If there is any way you can go see “Network”, do it, before it dissipates.