Reflecting on the Burning of Notre Dame

On April 15, 2019, the beloved cathedral of Notre Dame suddenly burst into flames. The fire continued until April 16, blazing through the night. Parisians were taken aback and could not believe their eyes. The world watched as this beloved monument, one of the most visited monuments in Europe burned before them. The burning of the cathedral struck terror and confusion of the hearts of those who saw it. Many Parisians were 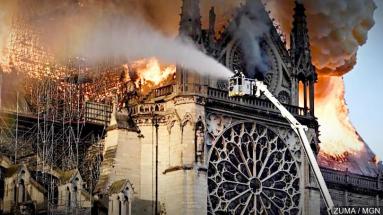 brought to tears at this tragic site. The cathedral that had seemed so sturdy and untouchable was suddenly engulfed in flames and heavy clouds of smoke.

As I watched the news and saw footage of the fire in Paris, I couldn’t help but wonder why it occurred when it did. According to officials in charge and others affiliated with the cathedral, it was already vulnerable due to its ancient methods of construction and its age (856 years old, to be precise). However, its occurrence after such a difficult time for Paris, with the relentless yellow vest protests, shootings and the uneasy political climate seemed to push the French over the edge.

I also felt as if I were not prepared for this; I suppose none of us were. As one official said during an interview “It’s impossible to prepare for something like this.” Parisians, including myself for a time, were accustomed to seeing Notre Dame. It was always there to greet us, along with visitors from around the world, standing proudly in the heart of Paris. It was an old friend, a familiar sight. It never really left you, it could still be seen in the far distance; from the bateaux-mouches floating across the Seine to the countless streets winding through the city. 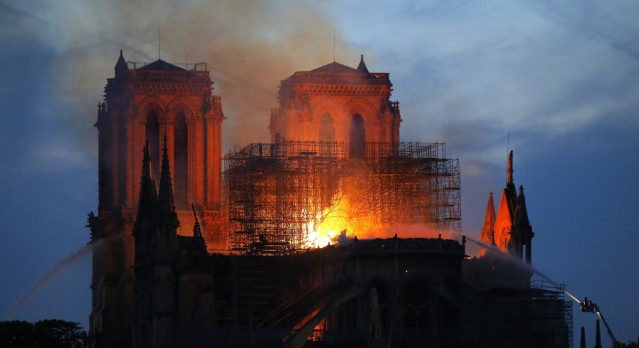 Notre Dame also had cultural significance. It was a source of inspiration, most notably showcased through Victor Hugo´s The Hunchback of Notre Dame. Notre Dame endured multiple revolutions and wars, standing triumphant in the midst of hardship. Many historic events have taken place there and was the home of many relics. It was an asylum, a welcoming place to ease the soul and alleviate the suffering in the world.

I heard the news as I was coming back from a college visit. It seemed surreal, and I had difficulty believing that this had happened. In preparation for my academic future in visiting colleges, I felt uneasy for France’s future and how they would recuperate from this tragedy.

I tried to recall my own memories of Notre Dame. I remember visiting it frequently, from day trips with school to trips with my family. What stood out to me in particular were the stained glass windows. I remember being inside the cathedral, being in awe of the beautiful glass window, with its colored hues of light shining through the opaque glass. It was such a magnificent cathedral. There were always bustling crowds outside of the cathedral, yet the inside was still and quiet. As soon as you went in, you would be overcome with a feeling of awe, a quiet poignancy. With its candle- lined pews, many would go inside to sit, ponder, pray, reflect.

Since the burning, there have been many interpretations of the hidden symbolism behind it. The burning of Notre Dame could symbolize the burning of France itself, perhaps the downwards spiral of France’s political and religious future. Though France has become an increasingly atheist nation, Notre Dame has remained a popular tourist 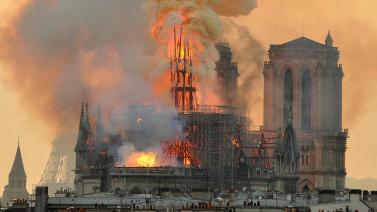 spot and has been known for its magnetic ability of attracting people of various religious beliefs. However, its partial destruction as a result of the fire could possibly symbolize the lack of religious fervor and the toil that France has endured. In light of the recent yellow vest protests in France, the burning of the cathedral could also represent France’s burning spirit of revolution and the burning of the unwanted governmental policies of President Macron.

Sadly, the next generation will never get to see the cathedral in its former glory. While the parts that have been lost will eventually be reconstructed, the cathedral will never be the same. While the fire was tragic, there is still hope. As people join hands in Notre Dame´s reconstruction, let them be reminded of the beauty and fragility of life. While things seem to last in the moment, they will not last forever. The clock ticks and the hand strikes, things are here now and gone the next. Time will never stop, beauty is fleeting. We can learn to enjoy the moment, to see the beauty in everything before it fades away.

Perhaps this fire will open the eyes of many. It will remind the world to enjoy things as they last and will bring the French together. Notre Dame is still standing, and so is France. Perhaps, as France reconstructs Notre Dame, others will be inspired to carry on restoration in their communities.