Diesel and Duke: The New Burger Place in Town

Diesel and Duke is located on 455 Bloomfield Avenue, Caldwell, New Jersey. It is a place where you can purchase homemade burgers and other delicious items. The owner first opened his location five years ago in New Brunswick. They are soon opening a place in Princeton. Diesel and Duke has a total of five locations in Montclair, New Brunswick, Princeton, Caldwell, and Jersey City. The restaurant before Diesel and Duke opened took the name of the owners two dogs, so the owner decided to continue that tradition by naming the new burger place after his two pitbulls. On Mondays through Thursdays it is open from 3pm to 8pm and on Friday through Sunday it is open from 12pm to 8pm. 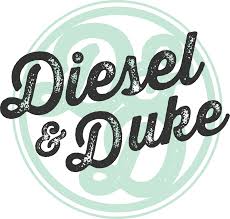 When I arrived at Diesel and Duke it was very difficult to find a parking spot, but that was to be expected since the place is located on a busy street. I walked in and noticed how nice and subtle the interior decorations and color combinations were. They had nice white walls with an accented navy blue wall. The part that really stood out to me about the interior design though was the nice light stained wood tables and the succulents on them. It made the place feel very earthy and suttle. People can look into the kitchen and see the cooks grilling and cooking. There is not much seating, only enough for a couple families, but most people would likely take this food home. The employees are nice and cordial. They take your order quickly and start working on it right away. The price of a burger is 7.99 dollars and the prices of the side vary, but it is not that expensive considering the quality of the burger.

The fountain drinks have a wide range to choose from and if someone wants a bottle of water it only cost around a $1.00. They don’t have a big selection, but they have a

very interesting one. Of course they have a standard burger, but I found the peanut butter sriracha bacon burger or the PBSB tasty. Diesel and Duke also accommodates for vegetarians and make a vegetarian burger. If people don’t like any of the burger selections all they have to do is ask for add ons to a standard burger. They had a few sides like french fries and onion rings. The service went quickly and I saw them making homemade onion rings in the kitchen. The burger was huge. The buns were crispy on the outside, but soft on the inside. The burger’s patty was perfectly cooked. The only problem I found with the burger is that the bun was smaller than the burger’s patty, so the burger was kind of messy. In my opinion, the burger made up for it in taste. The product of theirs that I found most delicious was the cheesy french fries. The french fries were crispy and in every bite there was cheese. It did not taste as if the cheese was cheap nacho cheese, rather it tasted like if it was American cheese melted over the french fries.

Overall, I found Diesel and Duke very delicious. They had great employees and a super nice seating place. Of course, Diesel and Duke has a few flaws, but with any business there is some. The food taste was great especially the french fries. I would recommend this to anyone who wants to get a nice, juicy burger but doesn’t want traditional fast food.