Look No Further For This Year’s Best Picture

With the Oscars rapidly approaching on February 24, 2019, several movie critics and fans are beginning to speculate which films, actors, and actress will receive nominations. Although these nominations will not officially be announced until mid-January, there already seem to be some front runners in the industry that could possibly sweep the show. One of these films being, “A Star is Born,” starring Bradley Cooper and Lady Gaga which was released on October 5, 2018. Since its worldwide premiere the movie has grossed $341,484, 570 and has remained at the top of the charts. With its raw, emotional plot and an extraordinary soundtrack, there’s no wonder “A Star is Born” is a strong contender for this year’s best picture award. 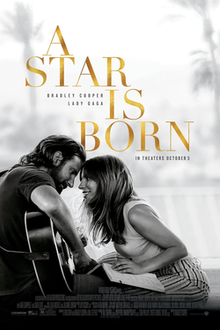 “A Star is Born” follows Jack Maine, a famous country singer who struggles with his addiction to alcohol and the challenge of slowly going deaf. One night after performing in California, Jack is so desperate to drink that he finds himself in a drag bar. There he meets Ally, a singer songwriter and waitress who is also struggling to make a name for herself in the music industry. After spending the night together Ally sings one of her own songs to Jack and he not only falls in love with her voice, but with her. Refusing to give up on Ally’s talent, Jack coaxes her into the spotlight and the two begin to tour around the country. Soon Ally is discovered by famous record deal and her career skyrockets while Jack continues to battle with his substance abuse. Although Ally is succeeding, Jack cannot help but tear her down because of his own personal demons. Spiraling downwards, Jack makes an ultimate choice at the end of the movie which changes Ally’s life forever.

Personally, from the time I first heard of “A Star is Born,” I was excited to see it because it was filled with a star studded cast. Not only did Bradley Cooper star in the movie, and produce it, but he also took voice lessons to capture the true character of Jack Maine. In addition, I wanted to see how Lady Gaga’s acting would compare to her already recognizable and powerful voice. While the movie was an emotional roller coaster and my entire theatre was left sobbing at the end, there is not a doubt in my mind that “A Star is Born” will steal best picture and many other awards. All together, the story’s plot about a distressed love story and the pressures of the music industry flowed effortlessly.

This is only further boosted through Cooper’s ability to capture the beautiful and haunting moments in a relationship. The soundtrack is another legacy of the movie; Gaga’s and Cooper’s voices are what make this remake of “A Star is Born” special in its own way. Not only would I agree with the raving reviews a “Star is Born” has received, but it is my hope that it sweeps the Oscars. Cinematography as original and moving as “A Star is Born” cannot be passed up by anyone.