After the release of the last movie of the Harry Potter franchise in 2011, fans of Harry Potter thought they had seen the end of the Harry Potter film universe. However, JK Rowling, its creator, came back as a screenwriter in 2016 with a spinoff and prequel story, “Fantastic Beasts and Where to Find Them,” directed by David Yates. The story followed Newt Scamander, author of the book “Fantastic Beasts and Where to Find Them,” originally utilized by Hogwarts students in 1926. The movie discussed the conflict

between the No-Majs or Muggles (non-magic people) and wizards, but most importantly showed the conflict within the magical world itself- the idea that purebloods (people from families of strictly wizards and witches) wanted to take control of the Wizarding World. The end of the first movie set up this new movie, “Fantastic Beasts: The Crimes of Grindelwald,” with a cliffhanger depicting Grindelwald himself, and it is obvious he is the main villain of this five part story.

Though the movie officially came out on November 16, I chose to go to an earlier screening on the 13th because I have always been an avid Harry Potter fan. Going into the film, I did not know what to expect; there were no books this movie was based off of, and it was completely new territory in the Wizarding World. The cast was clearly full of star power, starring Oscar winner Eddie Redmayne as Newt Scamander, Johnny Depp as Gellert Grindelwald, Jude Law as Albus Dumbledore, Zoe Kravitz as Leta Lestrange, Dan Fogler as Jacob Kowalski, Ezra Miller as Credence Barebone, Alison Sudol as Queenie Goldstein, and Katherine Waterston as Tina Goldstein. It debuted with $253 million on opening weekend.

That does sound like a big number, but it is apparent that the Fantastic Beasts series is relying on its link to the acclaimed Harry Potter franchise and is unable to cause the same stir amongst people. The plot of this movie alludes to familiar magic seen in Harry Potter, along with showing the beloved school of Hogwarts and loved characters and beasts alike, but as said in the title, it follows Grindelwald, a powerful dark wizard who wants to take over the world, including wizards, witches, and muggles. The movie opens with his clever escape from prison, and with the help of the Elder Wand, the most powerful wand in the Wizarding World, Grindelwald is shown gaining followers with the saying, “for the greater good.” Grindelwald’s only enemy, or at least the only person powerful enough to defeat him is Albus Dumbledore, a familiar face if you have seen or read Harry Potter. Grindelwald and his followers go to Paris in search of Credence, an Obscurus (a child whose magic has been repressed, resulting in a dark kind of magic that causes extreme havoc when released) who he wants to recruit to destroy Dumbledore. Credence, who is in his early twenties, was abandoned in an orphanage as a child but left at the end of the previous movie; he is now trying to find his family and thus, his identity. Grindelwald, a manipulative and persuasive speaker, attempts to recruit as many followers as possible through his speeches and he tantalizes Credence, claiming he knows his true identity. By the end of the movie, there is the stereotypical good versus bad fight with a lot of noise and bright lights, plot twists no one saw coming, and a thorough portrayal of the plethora of magical creatures Newt Scamander, a magizoologist, dotes upon.

Overall, I enjoyed this movie because of the amazing CGI, especially with the spells and animals, powerful soundtrack, and brilliant cast, but I was left confused at the end in terms of the plot. This movie had a lot of subplots, some of them tying into Grindelwald’s mission and others filling fans of Harry Potter in with backstories. The film also did not necessarily have one protagonist. Although Newt is the face of the Fantastic Beasts franchise, this movie focused significantly on Credence, who is starting to resemble Harry Potter with the whole “brave orphan” story. Subplots include Newt and Jacob’s bromance and struggles in the romance department with the Goldstein sisters, and the backstories of Leta Lestrange and Nagini. It is a lot to process, especially since the film is two hours of a lot of filler information. There are multiple allusions to the Harry Potter series, with viewers being taken back to Hogwarts, but the plot itself takes place in different locations in Paris. Some of the character’s actions seemed out of character, but we can assume that having a really powerful and intimidating wizard may have something to do with that. There were definitely more questions than answers at the end of this movie, especially with all this new background information, but it keeps viewers curious about the next movie in the franchise, set to come out in 2020, and it still links the franchise to Harry Potter.

As for my recommendation, I would recommend this movie to any Harry Potter fan or person with a decent background knowledge of the Wizarding World. Without that, this movie can seem long, boring, and extremely confusing. Harry Potter fans will not be disappointed in this movie, since it sheds light on a new story preceding the one they already know. Key characters are introduced and backstories are shown in an attempt to lay a strong foundation for the Wizarding World. However, there was controversy 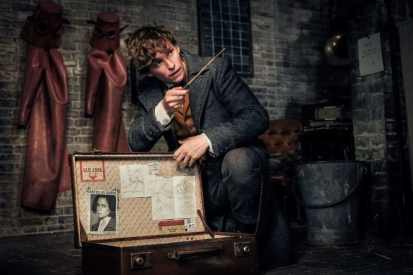 surrounding the movie. JKR faced backlash over Johnny Depp being cast, after the latter was accused of domestic abuse. Depp managed to portray Grindelwald as the cunning, manipulative person I had imagined him as. Grindelwald’s speeches captured the essence of what it would have been like listening to a powerful and manipulative man in the midst of chaos, and viewers will gain a better understanding of what it is like to feel helpless and have a man stand up in front of everyone, promising guidance. There needs to be a check and balance system in government, or else we cannot possibly have the rights and liberties we do. Today, this message of not being brainwashed and instead making your own decisions is crucial to society. Many people see ads on social media, hear about one thing from a friend, or hear a famous person advocate for something and immediately decide it is the right thing. It definitely could be, but one underlying message from this film is taking matters into your own hands and picking a side based on what you believe in. This also connects to periods in history at a certain level. However, in real life, those times were much more devastating and obviously real, so seeing imitations of it in fictional movies can help people better understand history and the world around them. Hence, with a strong cast, stunning CGI, and a plot that fills in questions while leaving room for new ones, “Fantastic Beasts: The Crimes of Grindelwald” is a film that should not be looked over!