Bohemian Rhapsody: The Epic Of A Man Named Mercury

We all know Queen. They are one of the few bands that has become immortalized, destined to never be forgotten. But how many of us know the story behind the band that brought us dozens of everlasting classics? I didn’t, but “Bohemian Rhapsody”, a film following the life of Queen and Freddie Mercury, sets out to show us. But how accurate is “Bohemian Rhapsody,” and is it any good?

The short answer to whether or not Bohemian Rhapsody is accurate is “mostly.” The movie definitely cuts some corners regarding how Freddie Mercury (played by Rami Malek) met his bandmates, his wife, and their rise to success. However, I don’t think this detracts from the film. The scriptwriters needed to find a way to make a real-life story suitable for film. If they recited the story of Queen verbatim, the movie’s performance would have suffered, as the stakes wouldn’t be as high and the events wouldn’t be as monumental. Regardless, there are still a few skewed details that I raise an eyebrow to. Some of the events towards the end of the movie are reordered to make the ending more 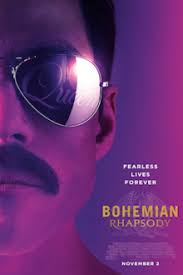 impactful, and while I do agree that it made the film more entertaining, I am not sure how ethical it is to change the events of a person’s life to fit the silver screen. Then again, the still living members of Queen did work on “Bohemian Rhapsody” for eight years. If they felt that the movie’s creative liberties were close enough to the truth, then I’m cool with them too.

As for the movie itself, it’s a stunning and invigorating drama that keeps you interested at every turn. We live through the lowest depth and greatest peaks of Mercury’s life, see how those around him react to his exotic personality, and his ongoing struggle with his sexuality in an era where being gay or bisexual was considered freakish and wrong by the general public. “Bohemian Rhapsody” also takes each and every one of us on a nostalgic ride through many Queen hits, including “Another One Bites The Dust”, “We Will Rock You”, “Killer Queen”, and the film’s namesake, “Bohemian Rhapsody”. Anyone who is remotely a Queen fan will adore how “Bohemian Rhapsody” handles each song’s cameo with electrifying flair — just like the songs themselves.

Queen is an unforgettable band, and “Bohemian Rhapsody” delivers a tale of equally dramatic proportions. While the movie isn’t accurate in every regard, “Bohemian Rhapsody” also doesn’t shy away from harsh subjects and takes the hardships and blunders of Freddie Mercury’s life head on, making many of the creative liberties worth it. “Bohemian Rhapsody” wins a 9/10 from me, and it’s a must watch for all of us who stomp-stomp-clap for our favorite champions. That’s all folks!