Life’s Not So Sweet at Sweetwater River: Review of “Riverdale”

The new hit American teen drama series “Riverdale” has already been renewed by the CW for a second season. The show is based on the “Archie” comic which was created in 1939 by John L. Goodwater. The comic includes characters such as Archie, Veronica, Betty, and Jughead, all of which are main characters in the television show as well.

“Riverdale” is nothing like the family friendly comics everyone reads in the Sunday paper. “Riverdale” is a twist on the classic comic, where four notorious teens are investigating the murder of Jason Blossom, the twin brother of Cheryl Blossom and a popular jock at Riverdale High School. The murder took place at Sweetwater River on the Fourth of July where multiple characters were seen. The suspects are endless; everyone could be a potential threat. 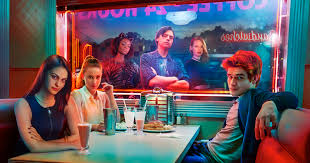 The Australian actor, K.J. Apa, plays Archie, a sophomore on the football team and an aspiring singer. The Disney child star, Cole Sprouse, plays Jughead, a sarcastic teen who is considered a weirdo and a loner. He is the narrator of the show and is writing about the murder investigation. Lili Reinhart plays Betty; she is an intelligent girl with an overprotective mother and is best friends with Archie. Camila Mendes plays Veronica, once a rich New York party girl, but the imprisonment of her father caused their family to relocate to Riverdale.

Personally, my favorite character is Jughead because of his witty one liners. Archie is probably my least favorite character because he makes all the wrong decisions and is really just an annoying flirtatious boy. Archie, Betty, Jughead, and Veronica are like the Scooby-Doo gang, but more obsessed with their relationships than the actual murder. Fans of the show on Twitter adore the romances between the characters; however, I am not a very big fan.

This teen drama series is certainly packed full of drama. Each episode reveals a new plot line and digs the viewer deeper into the plot. For instance, Archie is caught having an affair with his teacher, Mrs. Grundy, who has a dirty past. Jughead’s father is the leader of a gang, the South Side Serpents, which are the town criminals. Love is always in the air between the four teens and they have countless relationships. Each character has their own problems and faults, so life in Riverdale is never normal.

This show is absolutely ridiculous, but that is what makes it so much fun to watch. The major reason I watch “Riverdale” is because it is the perfect show to watch with friends. My friends and I talk about every little detail about each episode and make predictions about who killed Jason. It is hard not to be obsessed with “Riverdale;” each episode leaves me shocked and desperately wanting to know more about the murder of Jason Blossom.