If there is nothing good to watch on TV, try looking up at the stars! You will be amazed at the celestial events that will occur. For example, on February 10, 2017 two major phenomenons occurred: a penumbral lunar eclipse and the passing of the green Comet 45P. 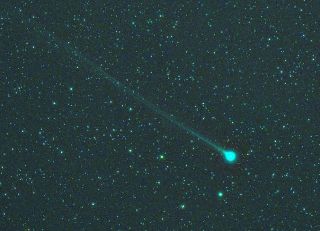 The full moon also known as the “snow moon” occurred and then the eclipse took place. A penumbral lunar eclipse means that the only a small part of the Earth’s shadow will cover the moon, therefore, the moon appears slightly darker. The best time to have gazed at the eclipse was around 7:44 p.m. ET, which is when the top of the moon is a grayish color.

If the eclipse was not enough to entertain you, then attempt to look for Comet 45P! The comet was most visible a few hours after the penumbral eclipse at around 3 am. This comet goes around the sun every five years, so if you did not catch it this year, better luck next time. Early Saturday morning, Comet 45P will be seven million miles away from Earth, which is the closest it will be during its orbit. Researchers will be able to photograph better images of the comet, as well as discover what material it is made from, and where it exactly came from.

A night of stargazing and dancing in the moonlight was a great way to spend Friday night. The two events: penumbral eclipse and the Comet 45P coinciding on the same night was certainly a spectacular sight.