Attending school every day is something most children in America don’t think twice about.  Most actually resent the concept of going to school.  Few regard education as a right or a privilege.  That’s because universal education has been around in the United States and dozens of other nations for decades.  There was a time when women and minorities couldn’t attend many institutions of learning in America, and many argue that modern American children take their education for granted.  In developing regions of the world, and those nations still practicing outdated societal standards, education is not something guaranteed to all.  In fact, it’s actually denied to some groups of people in countries like Pakistan, where the Taliban has held varying degrees of political control over the years. That’s where Malala Yousafzai comes in: Yousafzai, 17, has led a global revolution of activists for education reform where women are still denied education equal to that of men. 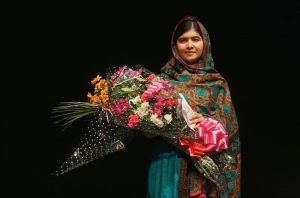 In 2008, Yousafzai began writing blog posts under a pseudonym for BBC News in the United Kingdom about the difficulties of being a young woman in a society that works to continue the oppression of the female gender.  In her posts, Yousafzai would write about how the Taliban banned girls’ education.  Yousafzai’s family made the courageous decision to continue sending their daughter to school, despite the risks.  She wrote about her experiences under the strict Taliban control, and continued to write for her BBC blog through March 2009.  By this time, the Taliban had lifted the ban on girls’ education, but the political and social climate was by no means stable.  When her blog ended in March 2009, a reporter for The New York Times approached Yousafzai and her family, proposing that a documentary of her daily life be filmed.  Her family agreed. Around the same time, the situation with the Taliban was worsening by the day.  Yousafzai’s family split up, but the Times journalist documented her stay with relatives in a rural area of Pakistan, where she noted that there were no books to read.

By July 2009, Malala reunited with her family, and the first order of business was to meet with a special representative of US President Barack Obama.  She voiced her concerns about the education situation.  Following the Times documentary, Yousafzai gained international recognition for her efforts. She was featured in numerous interviews around the world.  However, this newfound recognition came with a price. By the end of 2009, her pseudonym for the BBC blog was revealed, and Yousafzai began to receive death threats.

Over the following two years, Yousafzai would continue her efforts to improve education for women in Pakistan, as well as other areas around the world.  In October 2011, Archbishop Desmond Tutu of South Africa nominated Yousafzai for the International Children’s Peace Prize, praising her efforts to make education available for all.  She did not win this award, but Yousafzai was certainly not deterred.

Just as Yousafzai was planning to further her efforts worldwide in 2012, the unthinkable occurred.  On October 9, 2012, after a unanimous vote of Taliban terrorists, a gunman boarded Yousafzai’s school bus as it made its way back to her home from the school.  There were other girls aboard, and the gunman asked which one was Yousafzai. Once he identified her, the terrorist fired three shots, one hitting Yousafzai in the head.  She was rushed to the hospital, where she was in critical condition as doctors in Pakistan worked to remove the bullet to prevent further injury.  It was eventually determined that she needed better medical care, and Yousafzai and her family were flown to England, where she would receive lifesaving treatment.  She made a full recovery in England, where she then began to attend school.

Since then, Yousafzai has become a global advocate for education.  She has spoken at the United Nations General Assembly, and has also spoken with President Barack Obama at the White House regarding her goals for education.  Over the past couple of years, she has also been awarded numerous prestigious honors, including the National Youth Peace Prize in Pakistan, as well as Honorary Canadian Citizenship, for her efforts in forging educational equality.  In an interview with ABC News over the summer, Yousafzai told Amy Robach that she didn’t deserve the Nobel Peace Prize, as her ultimate goals have not been accomplished.  Despite her opinion, on Friday, October 10, 2014, she was named the co-recipient of the 2014 Nobel Peace Prize, sharing the award with children’s rights advocate Kailash Satyarthi of India.  Yousafzai is the youngest Nobel laureate in history, and just the second Pakistani to be awarded the prize.  Leaders around the world congratulated Yousafzai, including President Obama, who said in a statement, “Michelle and I were proud to welcome this remarkable young woman to the Oval Office last year.  We were awe-struck by her courage and filled with hope knowing this is only the beginning of her extraordinary efforts to make the world a better place.”

Malala’s ambitions for what the world can become is summed up in one sentence.  While only sixteen words, it represents a movement whose ambitions and goals are to make the world a better place through education.  In the words of Malala Yousafzai, “Let us remember: One book, one pen, one child, and one teacher can change the world.”