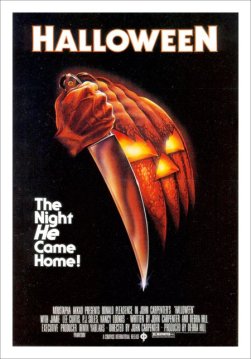 The classic begins on Halloween night, 1963, in the fictional town of Haddonfield, Illinois, where a six-year-old boy named Michael Myers (Will Sandin) brutally murders his older sister, Judith (Sandy Johnson). On October 30, nearly fifteen years later, Michael (Nick Castle) escapes the Smith’s Grove Sanitarium by stealing a station wagon from his psychiatrist, Dr. Samuel Loomis (Donald Pleasence), and a nurse (Nancy Stephens). Loomis follows Myers back to Haddonfield, trying to convince people, like Sheriff Leigh Brackett (Charles Cyphers), that Michael is on the loose, and will most likely wreak havoc on the town. Throughout the day of Halloween, Laurie Strode (Jamie Lee Curtis) notices Myers appearing almost everywhere she goes. That night, Laurie, Annie Brackett (Nancy Loomis), Lynda (P.J. Soles), and Bob (John Michael Graham) are stalked by Myers, as Loomis desperately searches the streets for his patient, who he says is “purely and simply evil.”

One thing that sets Halloween apart from similar horror films of later years is its lack of gore. Many people that haven’t seen the movie believe that it is gory, most likely because of its many sequels. It actually does not have that much violence, and barely any blood is shown in the film. It instead relies on a phenomenal amount of suspense, helped by its great music by John Carpenter and fantastic cinematography by Dean Cundey, to terrify the viewer. Pleasence’s performance is amazing, and he makes the viewer root for him throughout the entire film. The suspense builds up as the story moves along, assisting the climax to be as incredible as it is. Its setting in a suburban town makes it feel very close to home for many people. The look of the movie helps make it an essential to watch around the time of October 31.

Originally intended to be titled “The Babysitter Murders” (because Laurie and Annie babysit in the movie) “Halloween” was made on a budget of only $325,000, but after being released on October 25, 1978, it became one of the highest grossing independent films at that time. It spawned seven sequels (one of which did not really include Michael Myers), a remake that was directed by Rob Zombie, and a sequel to the remake, also directed by Zombie. It popularized the slasher genre, which includes “Friday the 13th” (1980) and Wes Craven’s “A Nightmare on Elm Street” (1984). It assisted the career of Jamie Lee Curtis, who would also return for the second (“Halloween II,” 1981), seventh (“Halloween H20: 20 Years Later,”1998]), and eighth (“Halloween: Resurrection,” 2002) films of the franchise. Pleasence returned for the second, fourth (“Halloween 4: The Return of Michael Myers,” 1988), fifth (“Halloween 5: The Revenge of Michael Myers,” 1989), and sixth (“Halloween: The Curse of Michael Myers,” 1995) films. John Carpenter later directed films such as “The Fog” (1980), “The Thing” (1982), and “Christine” (1983). I suggest to watch it on a large television screen around the time of Halloween, “the night he came home.”